What do heavy steel plates, umbrellas, pyramids and poems have in common?

They are all works of art that have killed someone.  It sounds so ludicrous and perhaps even embarrassing to be killed by an umbrella, but it’s true.  In fact, many times in history art has become lethal to the artist or the viewer.  Read on.

In ancient Egypt, the artisans who painted the interior tombs of the pharaohs were walled in with their art.  They died with the secrets of the dead.  Their skill was the death of them. 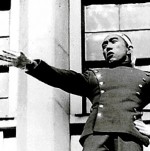 On November 25, 1970 renowned Japanese poet Yushio Mishima read his last poem to the ultimate art critic.  Mishima was infatuated with returning Japan to pre-world war II autonomy.  He and four of his followers took control of the commanding general’s office at a Tokyo military installation.  He gave a 10 minute speech to one thousand assembled servicemen urging them to overthrow the constitution.  After an unsympathetic response, he committed seppuku in the traditional manner, disemboweling himself with his sword and then being beheaded by a follower.  His death became the final stanza of his last poem.

A few years later, a worker was crushed while installing a Richard Serra steel sculpture in Minneapolis.
In 1988 a 16-ton sculpture by the same artist nearly claimed two more victims, only injuring them this time.  Art strikes again.

In 1991 umbrellas killed two more art lovers.  A conceptual installation by Christo, which consisted of 3100 umbrellas, each 500 pounds, was installed simultaneously on the coasts of Japan and California.  The first death occurred when high winds dislodged an umbrella and crushed a California woman.
Two days later on the other side of the Pacific Ocean:  The installation was deemed to be unsafe and was being dismantled.  During the process, a Japanese worker was electrocuted when he brushed a 65,000-volt power line.  Two more lives sacrificed for art.

If you Want Something Done Right, Sometimes you have to do it Yourself

And of course there are the myriad suicides and murders associated with art: Ernest Hemingway, Vincent Van Gogh, Hunter S. Thompson, for example.  And some say Warhol was murdered in the hospital during a routine gall bladder operation, perhaps to increase his prices.  Unlikely, but the circumstances surrounding his death still remain a mystery.
So on your next museum or gallery visit, speak respectfully to the paintings and sculptures, you never know if one has your name on it.

Applaud this!
Posted in
Tags